Soapbox Cincinnati is an online E-zine that features news and stories about Cincinnati, financial stories, neighborhood stories, restaurant stories and… a weekly guest blogger aktuelle kinofilme kostenlos herunterladen.  I was asked to be the Guest Blogger during Bike Month!

You can read my online blog posts here herunterladen.

I thought the first post should be somewhat historical, the second currently factual and the third futuristically optimistic… at least that was the plan… here’s the first post…

THE DNA OF THE MODERN CYCLING ADVOCATE

Picture this – New York City on Memorial Day herunterladen. In the midst of a huge “Bike Boom,” tens of thousands of New Yorkers are riding their bicycles through the city on a gorgeous summer day. Cosmopolitan magazine decides it would be a good idea to hold a car race on the streets of NYC that day… and they’re off… six cars racing each other through the streets programm um videos aus dem internet zuen!Mr. Henry Wells is doing well in the race but he starts to wobble and crashes into the vehicle operated by Ms lightroom presets herunterladen. Evelyn Thomas. Ms. Thomas suffers a fractured leg and is carted, unconscious, by ambulance to the Hospital.Sounds like another day in paradise, eh download movies anonymously? Well, it was… except for three significant facts…

1 silvester video 2020 kostenlos downloaden. This bike/car crash occurred on Memorial Day in New York City in 1896…2. This was the FIRST recorded automobile accident in the U.S whatsapp neue version herunterladen. and 3. Evelyn’s vehicle of choice was a Columbia…. BICYCLE.Yes, friends, by 1896 that new fangled contraption, the motorcar, was already causing a ruckus on the streets rent contracts garage free of charge. The same streets shared by pedestrians, folks on horseback, carts, buggies, wagons, bicycles and now … cars.To understand why today’s cycling advocates fight so HARD to protect our right to ride on the roads you have to understand where our DNA came from nieuwe ebooks gratis downloaden. Each strand of “Bike Advocacy DNA” contains bits of tens of thousands of incidents like the one in NYC in 1896.By 1896 “Bicycle Advocacy” was already in full swing. The League of American Wheelmen [now the more politically correct League of American Bicyclists] was founded in 1880 and reached a MILLION members very quickly. The League was the driving force behind the “Good Roads Movement” – a powerful political movement that focused on electing officials who could get roads PAVED … so commerce could move freely and, oh yea, so bicyclists would have a place to ride!  Cyclists did so well promoting their cause that the very first Vehicle Codes ever written, in Ohio and around the country, recognized the bicycle as a “vehicle” and permitted the operation of bicycles on the roadway.  That right was re-affirmed here in 2006 when the Ohio legislature unanimously passed the “Better Bicycling Bill.”May is National Bike Month. On May 19, 2010 the Ride of Silence was again held around the world and dozens of cyclists braved the weather to converge quietly on Fountain Square for a short ceremony. The Ride of Silence honors and remembers cyclists killed & injured the previous year while promoting awareness of road cycling. There were 716 cycling fatalities nationally in 2008 — trending down, down, down from a high of 1005 deaths in 1975. The Ride of Silence adds strength, unity, dignity and honor to the Bike Advocate’s DNA.We continue the fight to protect our right to ride on the public roadways – the same right Evelyn Thomas exercised from the seat of her Columbia back in 1896. The need to protect that right is stronger than ever today and we’ll keep fighting…we’re not going anywhere…“Cycle tracks will abound in utopia…”~~ H.G. Wells, A Modern Utopia, Chapter 2, Sec 3 [1905] 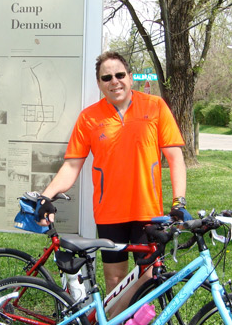 Click here to cancel reply.
« Steve Speaks in Columbus for BIKE MONTH
Can The Bicycle Save The World? »