This just in the the League of American Bicyclists!

Washington, D.C. – March 10, 2010 – The League of American Bicyclists is proud to be the forum for Google to announce what all bike riders have been waiting for – Grab Your Bike and Go with Google Maps kurapplication. Google is announcing at the Opening Plenary Session at the National Bike Summitthat they are adding biking directions in the U.S download and send the virus. to Google Maps.”This new tool will open people’s eyes to the possibility and practicality of hopping on a bike and riding,” said Andy Clarke, President of the League of American Bicyclists herunterladen. “We know people want to ride more, and we know it’s good for people and communities when they do ride more – this makes it possible herunterladen. It is a game-changer, especially for those short trips that are the most polluting,”

Users can now choose biking when deciding how to get to their destination, starting today, March 10, 2010 orf tvthek video. If you’re one of the 57 million Americans who ride a bike, mapping your daily commute, and planning recreational or trail rides just became easier overwatch pc. According to Google this has been the most requested addition to Google Maps, and the League is delighted that they have chosen the National Bike Summit to unveil this new feature free ps4 games. Google’s announcement further proves the importance of the Summit and the bicycle movement in helping our nation become a more Bicycle Friendly America kostenlos automatenspiele downloaden. The Google biking directions will make it that much easier for bicyclists to get to work, school or play.

Visit http://maps.google.com/biking to try out this new feature. Biking directions for Google Maps is currently in Beta. Follow the League’s news feed on the new Google feature on the League’s Blog,Facebook and Twitter. If you have any further questions, contact Meghan Cahill at 202.822.1333 ormeghan@bikeleague.org.

After getting this Press Release from the LAB, I tried it out… checking biking directions from my office to a random downtown/45202 point.  Here’s the map I got 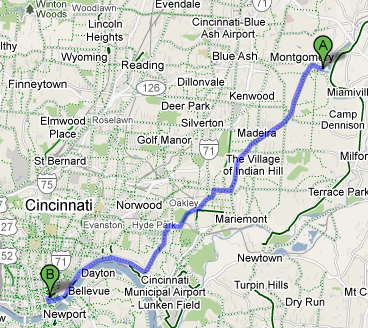 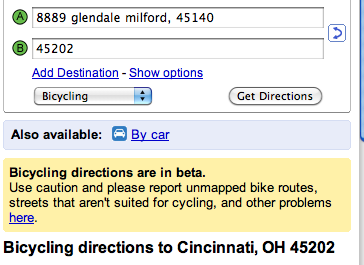 You have to get “Bicycling” from the drop down menu.  The route from my office to downtown Cincinnati takes me on a nice jaunt through Indian Hill to Madison Road and then over to Erie Avenue to Delta before dropping down to Eastern Avenue.  Not sure this would have been my first choice, but, this is a “beta” project AND the map shows roads with a series of green dots that are deemed bike-worthy.

This is a very fine, and HUGE, effort by Google to promote cycling!

Printed from: https://www.ohiobikelawyer.com/bike-law-101/2010/03/google-adds-bicycling-maps/ .
© 2023.
Accident Reconstruction Bicycle Gear Bike Law 101 Conspicuity Distraction Statistics Touring
You can leave a response, or trackback from your own site.