Ottawa Hills, Ohio.  I remember hearing this name as a kid – some fancy, rich little community up near Toledo, Ohio.  Wikipedia states that there are 4,564 residents, as of the 2000 census, and a police force.

The Police Department’s webpage is ominous.

“Our enforcement of traffic laws in well known in the region and we believe that traffic enforcement is a fundamental tool for keeping the Village safe spotify zum herunterladen markiert lädt nicht. Fair and consistent law enforcement is a key characteristic of our department.”

What comes to mind when you read THAT?  To me, that says “…we cut you no slack on speed, stop signs or red lights…”  Sure enough, I mention Ottawa Hills to a friend and the first word that comes up is “SPEEDTRAP.”

If you are a motorcycle operator, though, you had better watch your back – literally – if you choose to cruise through Ottawa Hills.

On May 23, 2009, Harley rider Michael McCloskey was gunned down – shot in the back – by an Ottawa Hills police officer, Thomas White.  His crime?  SPEEDING – doing more than the 25 mph posted speed herunterladen!

This story begins when Michael McCloskey and a buddy decided to ride their bikes.  Around 2:15 am they found themselves in Ottawa Hills.  Mr. McCloskey rides a rather loud Harley.

On the video, you can see that Officer White followed the bike for several minutes before he activated his lights and siren.  An agent investigating the shooting testified that it took about “5 seconds” or “600 feet” for Mr office excel kostenlos downloaden. McCloskey to stop the bike after Officer White activated the lights and siren.  Mr. McCloskey testified that the loud bike prevented him from hearing the siren and when he slowed at a stop sign he realized the police car was behind him.

The video is chilling.  Only a few seconds tick off the visible clock as Officer gets out of the police car.  You can see Mr. McCloskey straddling the idling bike with his back to Officer White.  You cannot hear what the officer says, if anything.  Suddenly there’s a “Pop” as Officer White fires his weapon and Mr herunterladen. McCloskey topples over to his right, the big bike falling as well. 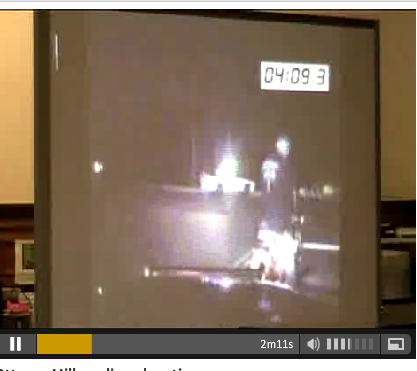 This is the image of Mr. McCloskey just before he was hit.  Less than five seconds elapse between the time the officer gets his car stopped and the time he shoots Mr. McCloskey in the back.  Mr new ios. McCloskey described the excruciating pain and then he realized he was paralyzed  – you can hear him yell this on the tape.  You can watch the tape for yourself here.

Officer White was charged with felonious assault with a gun specification.   His criminal case came up for trial in May, 2010, almost a year after he shot Mr herunterladen. McCloskey.   Officer White is described as a “part time dispatcher and part time officer” for Ottawa Hills.  A special agent investigating the shooting was asked, after reviewing all the evidence, why Officer White shot Mr. McCloskey. He said, “It is unknown.”

Officer White took the stand.  Here’s how the news reporter from the Toledo Blade described his testimony:

“…Labeling the situation as a “high risk vehicle stop,” Officer White testified that it would be “unusual” for someone to turn around when he shouted a command to them and so he believed Mr google chrom deutsch kostenlosen. McCloskey was reaching for a weapon.

“…It appeared as if he was reaching for a weapon,” he said. “I feared for my life so I fired one shot…”

You can look at the video.  Listen to it.  You can’t hear a command from Officer White.  Mr. McCloskey is just sitting there on the bike looking back.  The bike is idling. After stopping his cruiser, Officer White gets out and shoots Mr. McCloskey within a second or two videos in firefox downloaden!

The jury didn’t buy the officer’s story.  They found Officer White guilty of felonious assault.  The judge allowed Officer White to speak at his sentencing hearing.  Here’s where this case gets evens scarier – Officer White not only failed to apologize to Mr. McCloskey, but stood his ground and said he was “at a loss” as to how he could be indicted over a “split second decision.”

The judge didn’t buy it either.  He told Officer White that he “…didn’t even give it a second to take a breath and look at what was going on…”  Judge Cook gave Officer White a Ten Year prison sentence create the logo online and it for free.

Can you imagine how that case would have played out WITHOUT the dash cam?

Give some serious thought about riding through, or spending money in, Ottawa Hills.

[1] Steve Magas is an avid motorcycle rider and Ohio trial lawyer who has been protecting the rights of riders for more than 25 years.  Steve writes regular articles on motorcycle safety and legal issues.  Steve is a motorcycle commuter and tourist who is often found on Big Blue, his 2004 BMW R1150RT riding to work, to court, or to a gig with a trumpet case strapped on the bike!  Steve recently opened his own firm, The Magas Firm, and can be reached for a FREE CONSULTATION about your legal issues at 513-484-2453 or BikeLawyer@aol.com.