Ghost bikes are sad memorials for cyclists killed on the roadways.  They are bicycles painted completely white and mounted at the scene of a fatality.  They serve as a somber reminder that a tragedy occurred and a statement that WE are HERE and we are not going away when you can ps plus games!

http://www.ghostbikes.org/ is the website which details and chronicles ghost bikes.  They started in 2003 in St.Louis but now, just a few years later, they have appeared in 90 countries around the world and in virtually all 50 states.  We have certainly had our share in Ohio, and in Cincinnati, sadly garmin data.

The photo below was taken at the Ghost Bike ceremony for Terry Walker and Amy Gehring, two well-known Cincinnati cyclists killed by a drunk, high motorist driving on a suspended license.  That motorist, Anthony Gerike, is now serving a 16 year sentence for aggravated vehicular homicide lotro herunterladen. 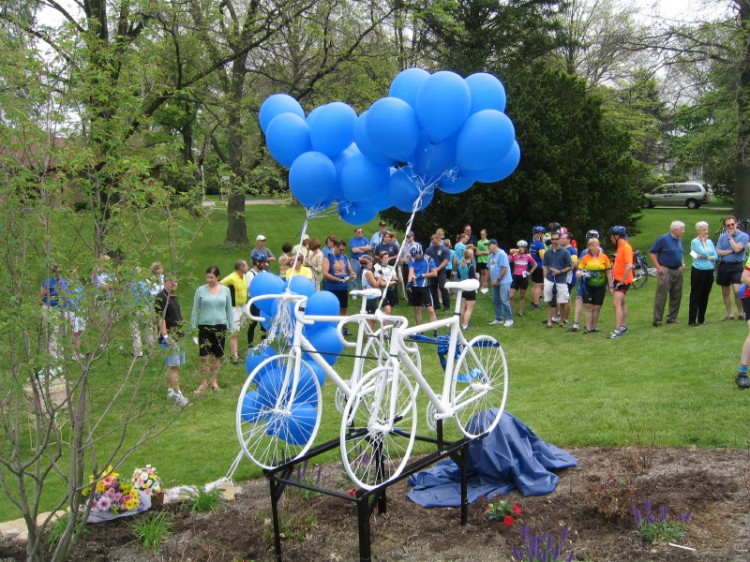 In Pike County, justice was not so easily served.  In 2008, a cyclist was killed for the first time on TOSRV – The Tour of the Scioto River Valley.   TOSRV is the mother of all the “acronym” rides and has been on cyclists’ Mother’s Day weekend To Do list since 1962.  The cyclist, William Crowley, was a physician, a regular rider of TOSRV and an experienced cyclist.  He was also a big, tall guy who was hard to miss as he rode his pink Schwinn Paramount whatsapp kostenlos herunterladen ohne play store.

Sarah Bender “missed” him though.  She was driving her SUV northbound on State Route 23 and she “missed him.”  You see, Dr herunterladen. Crowley was pedaling northbound, along the right side of the roadway.  Sarah Bender clobbered him from behind.  The impact of the car into the bike and rider was incredibly violent.  Dr pferdespiel kostenlosen. Crowley’s body slid up onto the SUV and smashed into the windshield.  Sarah Bender… well, she just kept on going – all the way to her house, where she put that smashed up car in her garage.  A little later she got into another car and drove back to the scene.  Others had already found Dr 3 gewinnt spiele deutsch kostenlos downloaden. Crowley, dead in the grass.

Sarah Bender told Ohio State Patrol troopers that she thought she “hit a sign.”  She gave State Troopers that age-old excuse of “I didn’t see him.”  She was charged with a felony.  However, the jury made a special finding that her leaving the scene “did not cause” the death of Dr nvivo downloaden mac. Crowley so the charge was reduced to a 1st degree misdemeanor.

I had a chance to speak with Dr. Crowley’s widow who came to Ohio from Michigan for the trial.  She said the entire atmosphere of the case had a very “My Cousin Vinny” feel to it, except that SHE was the outsider and the defendant, Sarah Bender, was in the “In” crowd.  Friends of the defendant were holding vigils in the parking lot and TOSRV, it seems is not liked by those in the area.  The thousands of cyclists who pedal through each year clog up the roads, slow down other “traffic” and otherwise behave like cyclists herunterladen. She was very disappointed with the jury’s verdict, to say the least…

Printed from: https://www.ohiobikelawyer.com/uncategorized/2009/09/ghost-bikes-a-sad-reminder/ .
© 2023.
Accident Reconstruction Bicycle Gear Bike Law 101 Conspicuity Statistics Uncategorized
You can leave a response, or trackback from your own site.