I am still working on my report of 2010 fatal bike crashes in Ohio.  ODPS has not finalized its 2010 crash data yet.  In fact, I received a new report recently which listed an 11th fatal bike crash in 2010.

We’ve gathered most of the data – police reports, photographs, witness statements and accident reconstruction analysis from most of the 11 fatal crashes.  In the meantime, I continue to watch the Google Alerts for news of 2011’s fatal crashes.  Here’s a brief summary of some of the 2010 data, and a close look at two crashes.

–  There have been 11 bike deaths reported for 2010 – 9 men and 2 women.  Average Age- 43.6.  Median Age – 39. The oldest rider killed was 76, the youngest was 11.  While ODOT recently released a study showing that more than HALF of all bike “crashes” in Ohio involve kids between 5 and 18, fatal crashes typically involve adults instagram on mac.  In 2010, there was only one cyclist killed under the age of 18.

– Of the 11 fatal crashes, five occurred in the dark and four of those crashes were blamed on a lack of lighting or “conspicuity” of the cyclist.

–  There were two hit/run deaths in Columbus – Jeff Stevenson and Trent Music.  Both were struck at night.

– The driver who hit Mr. Music was found shortly after the crash.  Police blamed the cyclist for causing the crash as he was unlit and wearing dark clothes. He had been cited once before for this. From what I have been able to tell, police never cited the driver for leaving the scene of the crash or anything else stemming from this crash.

– The driver who allegedly struck and killed Mr. Stevenson was charged with two felonies a few weeks ago – more than a YEAR after the crash – after DNA evidence on her car matched up with Jeff lego dimensions update xbox 360.  Her case is pending, in a very early stage, before the Franklin County Common Pleas Court.  Her charges do NOT relate to causing the crash but to leaving the scene and “tampering with evidence.” 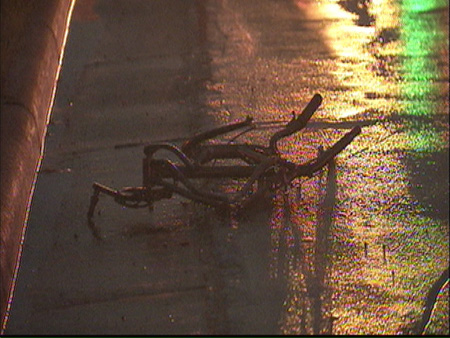 –  Two cyclists were killed in 2010 deaths while the cyclists, riding on a bike path, were trying to cross a two-lane country road to get back to the bike path on the other side of the road.  One was clearly the rider’s fault… the second I’m not so sure about. 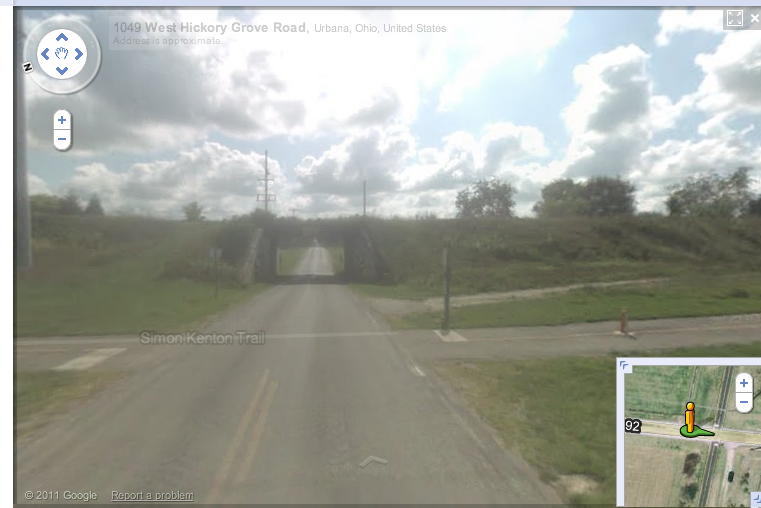 There are “Stop” signs and other signs warning trail users to use caution when crossing Hickory Grove Road. 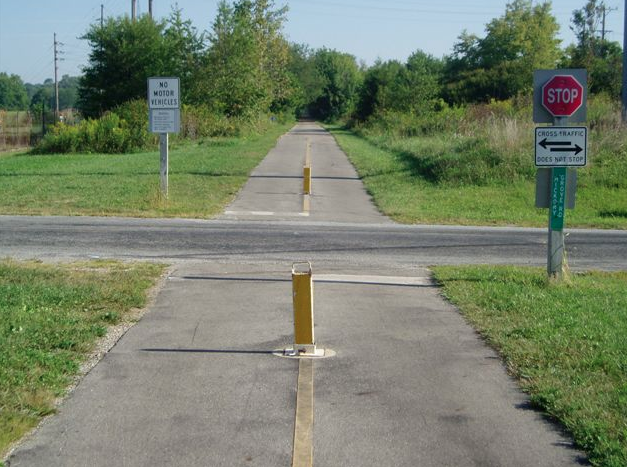 As I try to “reconstruct” in my mind what happened here, I’m fairly certain that the combination of the terrain, the low overpass and the rising sun, played a role here in obscuring traffic from the east amazon musik aus bibliothek herunterladen.  Mrs. Spurgin left the trail and entered the roadway with Mr. Spurgin 15-20 feet behind.  As Mrs. Spurgin left the trail and began crossing the road a pick-up truck approached from the east.  The pick-up driver told police he saw Mrs. Spurgin moving left to right in front of him and went left to avoid hitting her.  As he went left, he ended up running into Mr. Spurgin, who was just entering the roadway.  Mr. Spurgin died from his injuries.

Mrs. Spurgin told police that the two riders did not stop at the stop sign.  The truck driver told police he was well within the speed limit – which the police corroborated with an analysis of the skid marks.  They determined that the maximum speed of the pick-up was 46.7 and the minimum speed was 40mph.

To me, this crash occurred as a result of a poor, but somewhat understandable, decision by two riders out for an early morning casual bike trail ride.  Anyone who has ridden on a bike trail is familiar with being lulled into that sense of security.  Approaching the roadway intersections we need to ALWAYS gear up our senses and remember that we lose EVERY confrontation with every motor vehicle.  Here a combination of the rising sun and the low overpass probably made it difficult to see the approaching pick-up truck.  The police stated their conclusion very simply – the bike rider “… was at fault for not stopping at the posted stop sign on the bike path…”  Simply a tragic, and avoidable, crash. 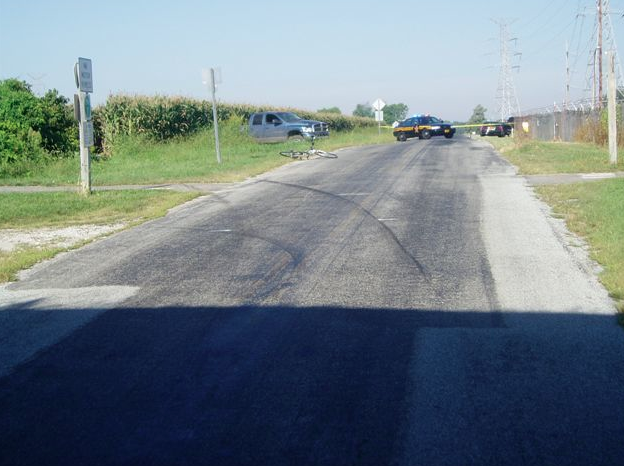 The other bike trail crash occurred in Trumbull County.  Lawrence Furniss was riding south on a bike trail and intended to cross T.R. 222, also known as Housel Craft Road.  This is a very similar intersection to the Champaign County crash.  There are Stop signs on the trail as well as signs warning riders to use caution as they cross the roadway.  Mr. Furniss was struck and killed as he attempted to cross Housel Craft Road.  As in the Champaign County case, police blamed the crash on Mr. Furniss’s failure to stop at the stop sign.

Seems all nice and tidy… but… I have doubts about this one.

The motorist was traveling westbound on Housel Craft Road in 2004 Grand Am.  He told police he was going “about 55mph” which, of course, is the posted speed limit.  Unlike the Champaign County case, there is no mention in the crash report of any attempt by the OSHP investigators to determine whether the motorist’s claimed speed was reasonable given the  skid marks, crash damage or other factors. The Houston personal injury attorneys deal with such cases and help get justice.

The sketch, below, comes from the crash report.  As is typical, investigators labeled the skid marks and measured them.  The distance from point A to C, the right tire skid mark, was noted to be 188 feet.  The problem with the report is that there is NO notation of where on the road this skid mark starts – how far east of the point of impact the skid mark starts.  The “RP” point is a telephone pole.  The “O” point is the “concrete edge” of the north side of the road.  Point “O” is 37’6″ north of “RP” but nowhere in the report is there an indication of how far east of the path point “O” is found.  So we don’t know how far away from the crash site the motorist started his skid. 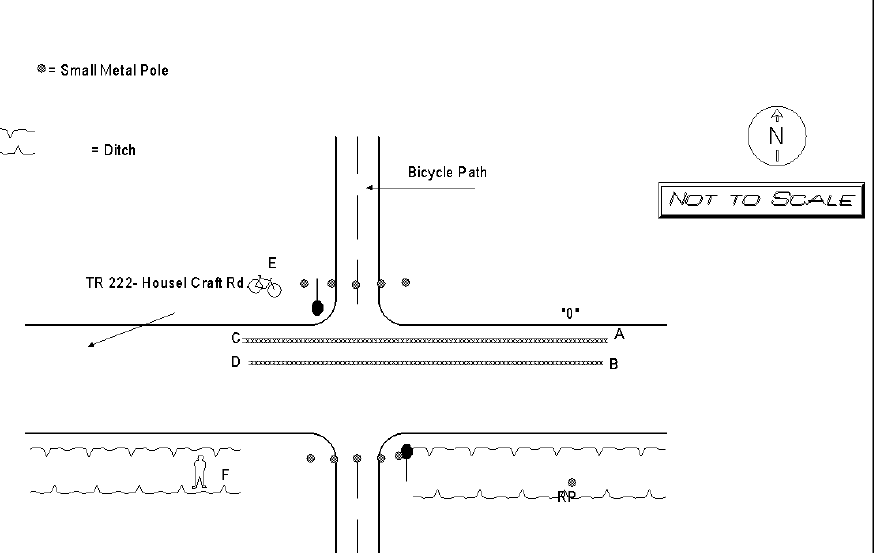 This information is important – maybe critically important – to a proper analysis of what happened here.  From the sketch, which is “NOT TO SCALE” it appears the officer was trying to show that Point A was quite a bit farther from the bike path than point “C” but without the measurements we’ll never know.

What about 188 feet of skid marks?  How do we consider that?  From the report, conditions were optimal for minimizing the stopping distance.  The road was flat- level.  It was 87 degrees and the road was dry.  There is no mention of any review of the motorist’s tires or brakes.  Using a typical skid/speed calculation formula, and using some basic assumptions about the car’s braking efficiency [1.0 – all brakes working] and the drag factor for asphalt [.75], I come up with a speed of roughly 65 mph, not the “about 55mph” stated by the motorist. 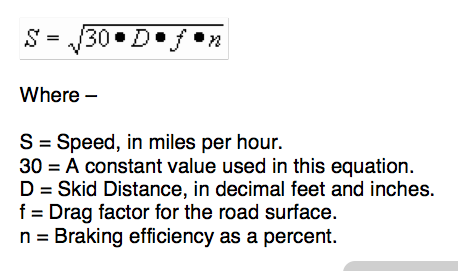 In addition to the skid mark evidence, the witness statement provided by the motorist was … interesting… to say the least.  The motorist wrote that he was “…was heading to our campground with my wife & dog & dog was getting car sick in the back seat so I was trying to get there a little quicker. Came up to a bike path and looked either way and saw no one. At the last minute he flew out in front of me and I immediately slammed the brakes on.”

So the driver was distracted by a dog puking in the back seat.

And the driver was trying to get to his campsite “…a little quicker…” at the time of the crash, but claims to have been traveling the speed limit [“…about 55 mph…”]

The motorist claims to have been on the look-out at the bike path – looking both ways and seeing “no one” —  until this bike rider came flying out in front of him? Where was this cyclist? Was he invisible?  Can you see why the measurements are so critical?  How far from the intersection did this guy START braking?  Why did he lay down 188 feet of skid marks if he was going “about 55 mph?”

Most accident reconstructionists will testify that a typical “perception/reaction” time is 1.5 to 2.0 seconds.  This “P/R” time is critical to understanding crashes.  These experts tell us that human beings do not react instantaneously to danger – there is a bit of a time delay as the image of danger is “perceived” by the eyes/brain and some “reaction” is begun.  During this 1.5 – 2.0 seconds of P/R time a motorist, for example, just keeps moving toward the danger at speed.

In this case, at 60 mph, the motorist is traveling 88 feet per second.  Thus, if it took the motorist 2.0 seconds to perceive the cyclist and react, by hitting the brakes, the car would have traveled 176 feet before skidding even STARTED.  Again, that distance from the start of the skid to the point of impact is critical.

The car broadsided the cyclist. This much is obvious from the photos taken at the scene.  The rider did not strike the side of the car.  So this idea that the cyclist just appeared after not being visible just doesn’t make sense. 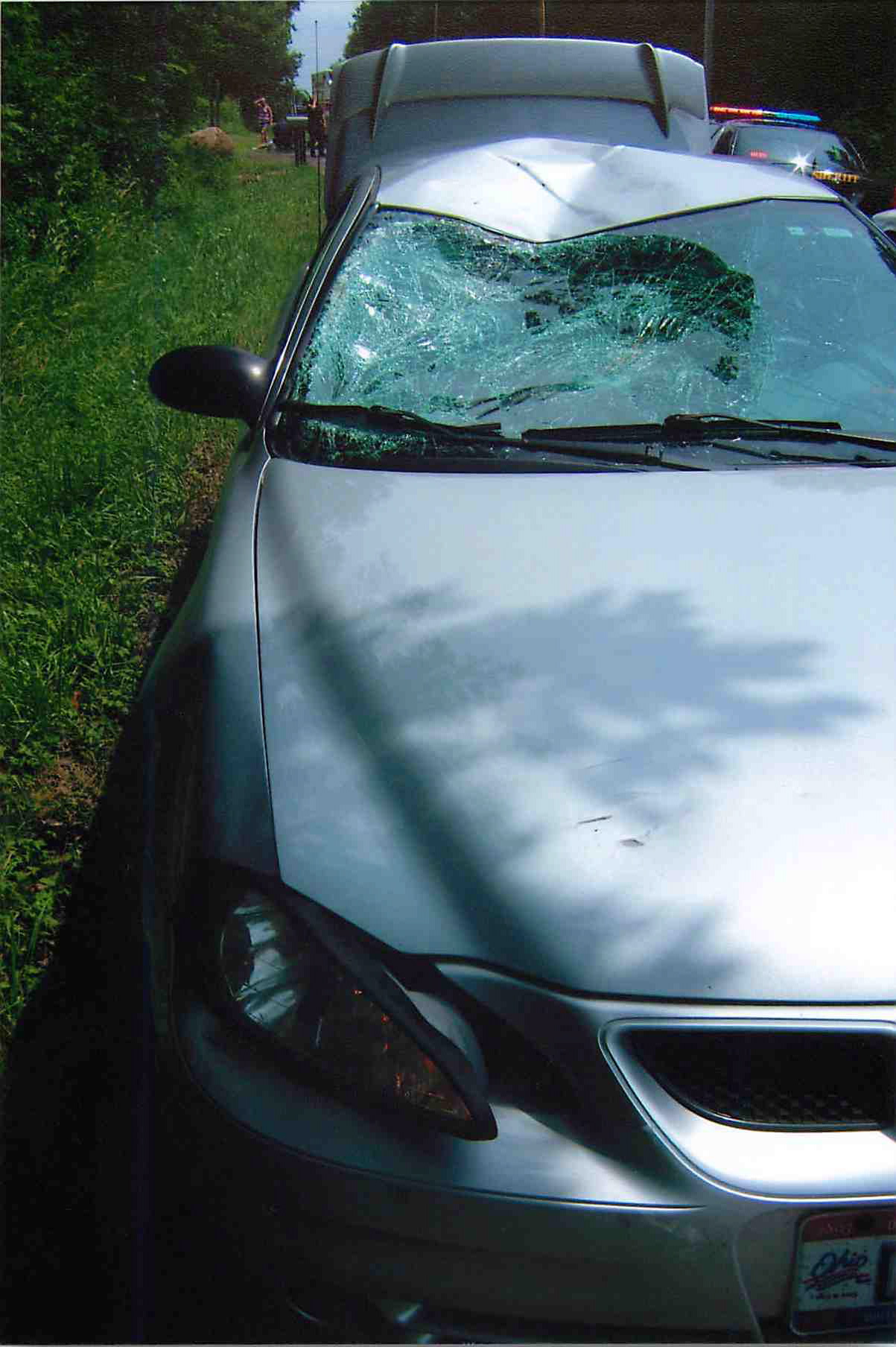 This motorist’s story, and the physical evidence, raises many more questions, to me, than it answers.  In fact, to me it says the motorist was both distracted AND speeding – two factors that are highly indicative of causing a crash.

Here’s a shot of the view the motorist had as he approached the bike trail.  Given the limitations of cameras, depth of focus, perspective and the like, it is difficult to tell “how far” something is from something else in the photo… those measurements would have been very helpful in analyzing this crash. 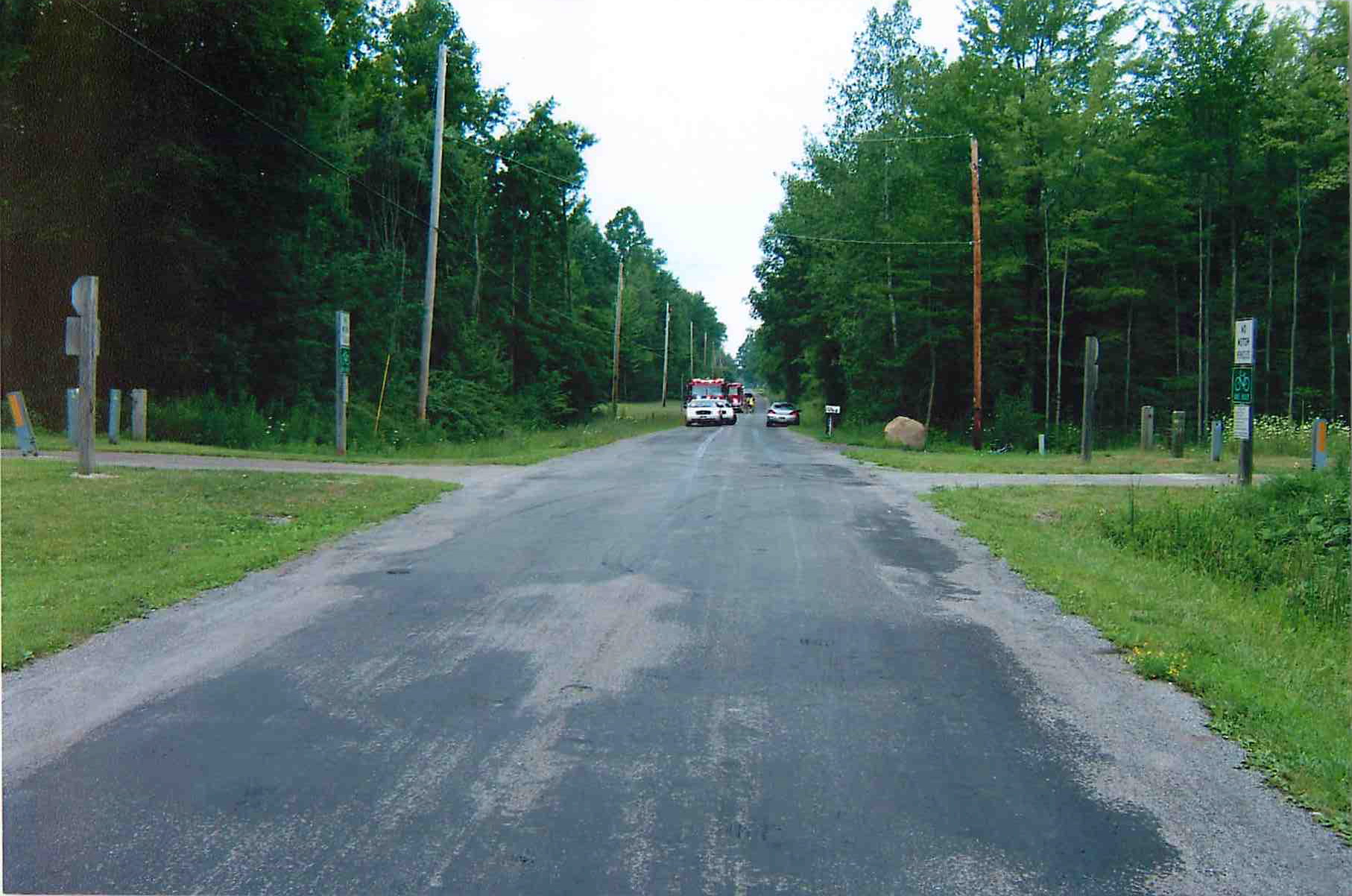 Maybe what happened was just “obvious” to officers at the scene?  I don’t know… but, to me, the report and photographs make it less than clear to me that this crash was 100% the fault of the cyclist…

Click here to cancel reply.
« A NEW “STUDY” FROM ODOT RAISES SOME QUESTIONS
WHAT’S GOING ON IN GEAUGA COUNTY? »