May is BIKE MONTH, of course…and I was very excited to be invited by Yay Bikes to speak in Columbus during their Bike Month event tomtom new maps!

We had a very nice turn-out on a not so nice evening.  Many folks rode in for the presentation.  I spoke for about an hour on “Protecting Your Right To Ride” – complete with slides and 8×10 glossy photographs with circles and arrows and  a paragraph on the back of each one… as Arlo Guthrie used to sing…  You can read about it here kan je netflix downloaden op laptop.

I’ve given a similar presentation several times now.  People, even long time cyclists, are often surprised to learn that the VERY FIRST CAR CRASH recorded in the United States involved a man driving a car and hitting a woman on a bicycle herunterladen!  Yes, friends, in 1896, during the first big “Bike Boom” Evelyn Thomas went down in history as the first cyclist to be hit by a car in the U.S untertitel von youtubeen. – at least as far as reported crashes go.

This happened on Memorial Day in New York City and, to me, is one of the very first strands in the DNA that makes up the very core of today’s Bike Advocates itunes kostenlosen für windows xp.  This DNA has been toughened up through the years by a number of other significant events – The Good Roads Movement, the passage of the very first Vehicle Codes which incorporate the “bicycle” as a “vehicle and much, much more herunterladen.

The fight goes on today.  More than ever the people who want to relegate cyclists to “paths” and special “lanes” are ready to knock us off the roadways in a heartbeat – all in the name of “protecting” cyclists windows icon downloaden.

In Florida, the debate goes on.  The legislature is trying to pass a bill that would MANDATE that cyclists use the small bike lanes painted on the far right edge of the roadways herunterladen.  Cyclists have asked the governor to veto the bill

Florida is Number ONE in cycling deaths and is one of the Big Three, along with California and Texas gimp 2.8 kostenlos downloaden deutsch.  Of the 716 cycling fatalities in 2008, the Big Three states accounted for 287 of them – or a whopping 40%!  I guess you can  lower your risk of being killed on a bike by 40% by simply NOT riding in Florida, California or Texas, eh psp spiele iso kostenlos downloaden?

Bike Month also brings the annual Ride of Silence.  This somber event is held all over the world and features cyclists riding on the roadways, slowly and silently, on a relatively short ride to honor and remember those injured and killed on the roadways over the past year.  The ride is also designed to raise awareness in the motoring public that we’re out there, and that we have a legal right to use the roadways.

Last year, the Cincinnati event was featured on the front page of the Enquirer.  This year, from what I can tell, we got no newspaper coverage at all… although the TV News did cover the event.  I was asked to speak at the Fountain Square event, where three different groups of riders met.  We had an excellent turnout again and, fortunately, there were NO names on the Cincinnati list of “fatalities” this year…

One of the topics for discussion last night was SB 174, currently percolating in the Ohio Senate.  At 3pm on “Ride of Silence Day” several members of the Ohio Bicycle Federation were in Columbus to present proponent testimony in favor of the bill! 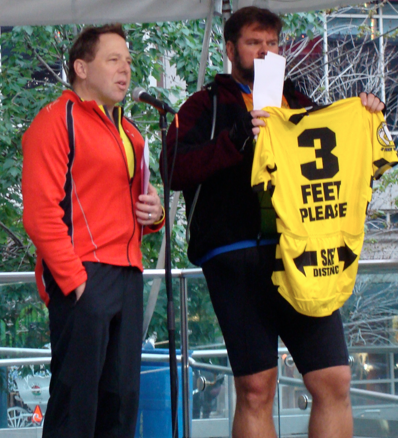 The “writing” portion of today’s post relates to this site – Cincinnati’s SOAPBOX.

Sean Rhiney asked me to be a contributing Blogger for the next week, so I’ll be submitting 3 blog posts to contribute to the Soapbox history.  My first post will involve a similar lesson to the one posted here – the History of Cycling Advocacy and the DNA of the Cycling Advocate.  The second, I think, will focus on Criminal Motorists & other hot button issues.  The third will entitled “Can The Bicycle Save The World?”

Tune in next week and check out the BLOG tab!