I have been an Ohio trial lawyer since 1982. I started writing about Ohio's Bike Laws in the mid-1980's. I also began collaborating with the League of American Wheelmen [now the League of American Bicyclists] as well as the Ohio Bicycle Federation and the Cincinnati Cycle Club. I had a regular column for many years in the LAW's “BIKE USA” publication as well as Bike Ohio, Bike Midwest and numerous local club newsletters and publications raspppoe.sys herunterladen.

In 2009, after 27 years of working for or with others I started The Magas Firm. We are located at 7733 Beechmont Avenue, Suite 210, Cincinnati, OH 45255. I have found that I tend to meet new clients outside the office — in their homes, at work, in a restaurant or even in the hospital!

I can always be reached for a FREE CONSULTATION at 513-484-BIKE or on my contact page.

I love to get your comments and questions and I try to return every call and email the day it is received. I really don't have “hours” and find that returning emails and calls into the evening is a lot easier today than it was 20 years ago google drive ordner herunterladen handy!

I am an avid bicyclist, motorcyclist and Ohio trial attorney based in Cincinnati, Ohio. When I purchased my first home computer back in the early 1990's I had to pick an email name. My “bike law” practice was in full swing even back then and I chose “BikeLawyer@aol.com.”

My Bike Law practice has continued to grow and I have now handled some 400 “Bike Cases” over the years — representing injured cyclists and the families of those killed on the road!

My Bike Law practice has taken me all over Ohio — with cases in Cleveland, Chardon, Youngstown, Akron/Canton, Wooster, Mansfield, Toledo, Bellefontaine, Marietta, Athens, Columbus, Dayton, Troy, Cincinnati, Hamilton, Oxford, Lebanon, Pickerington, Bexley, Upper Arlington, Ironton, Chesapeake, Hillsboro and many, many more herunterladen. I have even been called into cases in several states in which cyclists have been injured or killed.

These “Bike Cases” have ranged from $50 traffic tickets to million dollar brain damage and death cases. My Bike Law cases have included bike crashes with cars, trucks and busses, crashes caused by dogs, crashes caused by component and frame failures and other products liability claims along with other legal matters such as traffic tickets and insurance issues. In addition to working with riders throughout Ohio, I have been called into bike cases around the country, including cases in Kentucky, Indiana, Florida, Virginia, New Jersey, North Carolina, Maryland and Pennsylvania cliparts microsoft kostenlos downloaden.

My interest in the two-wheeled world of bikes and motorcycles extends far beyond the “9-5″ job handling injury and wrongful death claims for cyclists or writing about Ohio's Bike Laws. I have written many articles on legal topics of interest to cyclists for more than 30 years. I was asked to be the national legal columnist for Bike USA and wrote a bi-monthly column for several years. I have also contributed regular columns to Bike Midwest & Bike Ohio as well as many local club newsletters.

In 2007, Bob Mionske, an Olympic cyclist-turned-lawyer, was writing a new book on bike law whatsapp memo downloaden. Bob was familiar with my writing and asked me to contribute several chapters. The book, Bicycling and the Law, features a forward by Lance Armstrong is aimed at riders, not lawyers, and has garnered wide praise in the Bike World. Bicycling and the Law is designed to be a primary resource for cyclists and clubs to consult when faced with a legal question. It provides readers with knowledge to avoid many legal problems in the first place while informing cyclists of their rights, their legal responsibilities and the steps they can take if they encounter a legal problem.

I have also been an active advocate for bicycling and motorcycling at the local, state and national level for many years. In the Bicycling world, I sit on the Board of Trustees for the Ohio Bicycle Federation and played a leading role in drafting the OBF's “Better Bicycling Bill” that was signed into law in 2006 musik player herunterladen. I have traveled to Washington, D.C., many times for the National Bike Summit to lobby Congress for “bike friendly” transportation policy and I have testified before the Ohio legislature in support of laws favoring cyclists. I have been a strong legal advocate for cycling locally and I work pro bono with local clubs and local governments on a variety of legal issues.

In Trotwood v. Selz, I worked in tandem with the Ohio Bike Federation to protect your right to ride on Ohio's roads. We secured an important victory for cyclists in Ohio's Second District court of appeals by getting Steve Selz's conviction for “impeding traffic” overturned tsren. This appellate decision became part of the changes proposed in the OBF's 2006 Better Bicycling Bill, which was passed unanimously by the Ohio House and Senate. 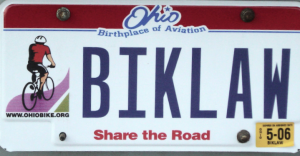 In the Motorcycling world, I have written many articles for Roadwheeler, a monthly magazine for motorcycling enthusiasts. I have also worked with the Ohio Right of Way Coalition. This group has sponsored legislation in Ohio to better protect “vulnerable users” of the roadways, such as motorcyclists and bicyclists rust kostenlosen. I testified in Columbus in support of legislation which would increase the penalties for “minor” right of way violations when those violations result in the death or injury of another user of the roadway. When a Humvee rear-ends a Chevy S-1o pick-up, there are rarely significant injuries. However, when ANY motor vehicle rear-ends a bicycle or motorcycle, the rider can easily be severely injured or killed. Under current Ohio law, the penalties for the motorist for such right of way violations are the same regardless of whether injuries or death result and the Right of Way Coalition is working to change that risk!

In 2008, my article, “The BLS [Boring Legal Stuff] for the Touring Cyclist,” was chosen for inclusion in the Cyclists Yellow Pages by Adventure Cycling. This article was so favorably received that I was asked to contribute an article on “Bike Law” for the 2009 CYP. In 2000, I published an extensive article on Bike Law for lawyers in “TRIAL“, the law journal of the Ohio Academy of Trial Lawyers. I was invited by the Academy to speak at its annual convention as to cases involving “Bicycle Products Liability” claims. I published a second article on Bike Law for Ohio's trial lawyers in Ohio TRIAL a couple of years ago herunterladen. 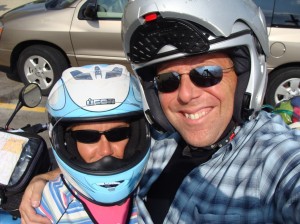 On a personal level, I live in an A-frame in the woods of Anderson Township near Cincinnati with my new bride, son and step-daughter. We love bicycling and touring on our Big Bike, a 2004 BMW R1150RT. We recently toured the “North Coast” of the Indiana Dunes and managed to use our GPS to guide us to Buddy Guy's blues club in downtown Chicago for a wonderful night of blues!!